Metaphysical quality stones? Why do people collect minerals how do you get a good deal?

I have been involved in the mineral, stone and fossil hobby since 1981 when I first began selling rocks from my own collection in the swap area of the Cincinnati Gem and mineral show. I became more involved in my teenage years, and had mined at over 30 sites by the time I was 21. After college, in 1997 I decided to begin this company, The Crystal Circle with my dad Jack, who at the time was a varsity soccer coach, but who had a degree in geology and had taught science class in an elementary school for many years as well. Over the last 20 years, I have been to and sold at well over 200 mineral shows, met thousands of collectors, and sold millions of dollars of minerals, like quartz crystals, tourmalines, dioptase, fluorite, topaz, and on and on.

A lot of people are interested in the metaphysical quality of crystals. I’d bet at least 30% of customers overall at mineral shows have this motivation. Whereas the typical mineral collector is interested by the inherent quality and rarity of each mineral specimen, the metaphysical customer is more interested in “what does it do for me?” Many of them hold stones and have a feeling, or impression come over them. Sometimes they hold a hand above the pieces, palm-side down seemingly “scanning,” for ones that give them a sensation or “resonance.”

It’s common for people to be prejudiced around people and behavior they don’t understand, history is rife with examples. Metaphysics is basically a philosophical line of thinking that jumps off the empirical scientific measurement system. By definition it is unmeasurable and dwells in the nature of perception, experience, and feelings. It is more of an art than a scientific approach. Metaphysics seeks to investigate bigger questions, that physics currently can’t answer. In my business this often is experienced by people waving their hands over rocks that sit on a table. It may look weird, but it is meaningful to the person doing the waving!

It’s quite common for me to hear other mineral dealers snicker behind their backs and call them “heelie-feelies.” These same dealers, typically keep their crappiest quality stuff to sell to them, and freely admit (to other dealers) this lowest class of material is — the “metaphysical” quality stones.

People interested in the stones’ energy, typically aren’t paying attention to its inherent qualities as a specimen (does it have a termination? a lack of damage? Is it a good example?). I sell minerals to hundreds of metaphysical practitioners and store owners every year. I explain to anyone with an interest, the virtues of a good crystal. I go to great lengths to procure excellent examples across a wide swath of values. I think the prejudiced dealers need to grow up and open their minds, (after all, we are conscious primates, traveling 1,000 miles per hour sitting still as the earth turns, orbiting a nearby star). Conversely,  I think the metaphysical collectors need to become more grounded by learning the virtues of the specimens more; what makes this example of tourmaline special? Is it from a closed mine? Is it damaged or not? Is it rare or common? By doing so, they will make better purchases, and build a more valuable collection over time, with a much greater re-sale value in years to come. Also, I’ve gathered from numerous practitioners that intact, undamaged crystals make for superior metaphysical “tools” than damaged ones, and the best values are at mineral shows where the merits of the minerals are showcased and valued on a fair market basis and not jacked up for their alleged metaphysical values.

I love crystals, and minerals and gemstones. I have my entire life. Currently there is a gap between a scientific/aesthetic value and an energetic/ metaphysical motivation to collect stones. One of my greatest dislikes of this business are dealers that prey upon metaphysical collectors. These are not the ones that throw around the terms “heelie-feelies,” these are dealers who cater to metaphysical customers telling them this stone will bring you wealth or this stone will bring you love… and what they follow-up saying is that only the stone that they have made a special name for is good for that.. (insert made up metaphysical name)! Typically, these are common rocks that may have a contemporary value of say $1 and they are selling them for $35 or $350! At every show we do, we have customers asking for weirdly named minerals, typically invented  by these unscrupulous vendors so they can say they are the only ones that have it, (even though they do not, its just get by a conventional name) purely for their own profit. About 15 years ago I sold about 20 pieces of red zincite crystals to one of these corrupt metaphysical dealers at a show in Springfield Massachusetts. I mentioned to him my price to him was very close to my cost which he said was good. He bought them on a friday, and returned to the show on Sunday, where he came up to me and gloated that he had sold every piece at one of his metaphysical classes for crystal healing that weekend, for three times what he just bought them from me, because he told his students that zincite crystals were “crystallized sex.”

There is a very long history of using stones for one’s health  and well being, over the years I have had a conversation or two with religious fundamentalists, and I’ve pointed out the bible has many references to stones, including in the book of exodus; Aaron’s breast plate: a grid of 12 specific stones used to enhance discernment or good judgement to the high priest (what’s interesting is a seemingly metaphysical effect to a collection of specific stones outlined in the bible).

For anyone who is particularly closed minded…

Look down at your hands, this is you isn’t it? Your body is about 60% water. We all know how often we are drinking water and excreting water, this same process of exchange can be used as a model when considering that most of our cells die and are replaced within several days to months, some last years,(only some eye, brain, and central nervous system cells last a whole lifetime) but what we think of as our body is really a pattern or blueprint governed by DNA that is composed of the available elements around us, that we “borrow,” for awhile before returning to our environment.

If we think of our bodies as a measuring tool, then imagine the home you are living inside: made of wood, sheetrock (gypsum), steel, paint, shingles… how long will it live, defined as a “house”? 40 years? 100 years? maybe 200? The elements of your house originate from trees, and mines, and are crafted and at the end burned down or demolished, or (hopefully) recycled somehow. All the elements in your body and the ones in your house are “borrowed” from our planet for a very short period of time.

So what about crystals? One of my favorite types is amethyst from the Brandberg district of Namibia. Small mines in the Namib desert produce some of the most spectacular amethyst in the world. The basalt that the pockets are found within have been dated to around 150 million years. The quartz crystallized then, which means these crystals have been intact in the same form for over 150 million years! These structures are so well formed, they maintain their “elemental sovereignty,” and have not exchanged elements (like our bodies) with the environment, even after being removed from their pegmatite homes. I have a carbonaceous carbonate type meteorite (Allende) that contains micro diamonds and has been intact in its form since the birth of the solar system (over 4 Billion years). Its an ugly rock, but holy S#@t is it cool to think about. 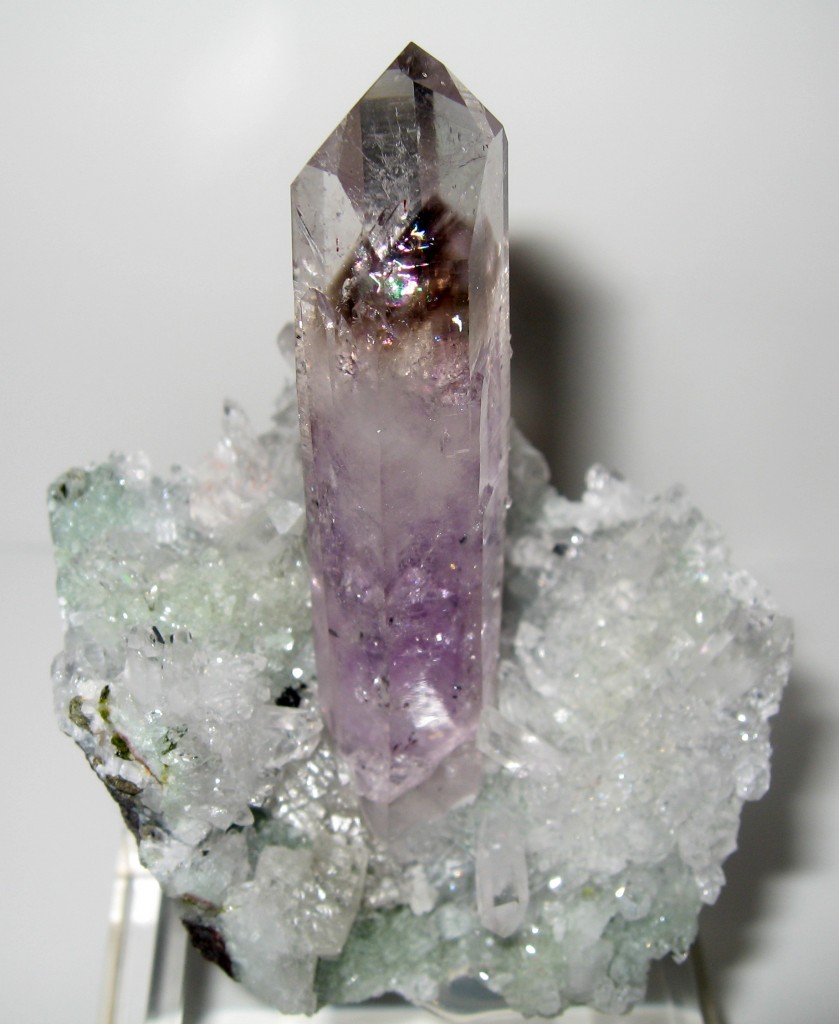 Amethyst on matrix, from Brandberg, Namibia

Do you define yourself by the elements of your body, your brain? How do you compare with the nature of a simple Quartz crystal? Perhaps there is an interaction between the elements in our body and the elements in the crystals, or a resonance shift when both bodies interact? We know the body has an electric charge and frequency. We also know that Quartz is piezoelectric, and when an alternating current is applied to a Quartz wafer, it induces acoustic waves. This is why Quartz watches are so accurate and how a Quartz radio is so accurate when regulating  frequency. Perhaps there is far more to the overall picture when you hold a quartz crystal and “tune into it,”

Regardless, keeping an open mind and respecting other people’s beliefs is the way to go. I make an effort to educate people about minerals and crystals of all kinds. I often recommend customers “shop around,” and don’t buy everything from only one dealer, especially if you are buying online or through mail order. Educate yourself about market values, and qualities. Mineral shows are the best way to do this, as many dealers are under one roof and its very easy to shop around and compare different minerals and prices.

To check out the Crystal Circle Web Site click here.