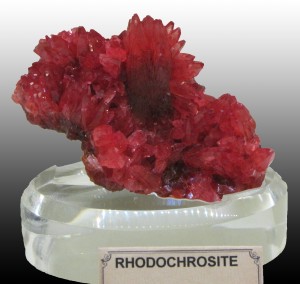 A dynamic Rhodochrosite from the Kalahari

A few of my favorite pieces from Scott Rudolph’s Mineral Collection while on display at the Springfield Gem and Mineral show in 2011.

I shot these pics through the display glass, when I had some free time at the show (we’ve been selling there for over 12 years running.)

I had the opportunity to talk with Scott about collecting minerals. He was friendly and actually humble about the endeavor. He mentioned he sold his coin collection and began mineral collecting by buying several noteworthy collections. (Keith Proctor, Marshal Sussman, and others), about 5 years ago. 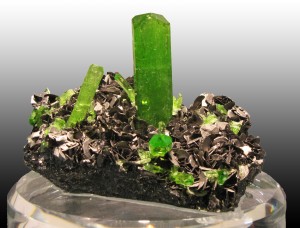 He said that by purchasing entire collections he was in effect compressing decades of time and experience, which I understand is a major reason why nearly all his pieces on display were Stunning.

I also really like the style of his custom – made bases. I had recognized the style from Marshall Sussman’s collection. Scott said he liked the simple, rounded look that doesn’t distract from the piece itself.

I have often thought about what I would do 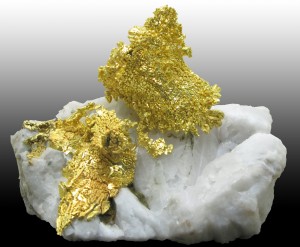 with millions of dollars, and how I might build an incredible collection. In my opinion, Scott is “leading the way,” in style and class.

I would much rather have this incredible gold than say artwork. IT SPINS!

The backside shows off its Crystal Circle!!

Pictured below..  along with his stunning display of Smithsonites. These were easily overlooked given the major players nearby. They grew on me as I passed by the displays. I realized slowly how their subtle color differences created something altogether new. I loved how such distinct colors are neatly set as five examples. The starkness of the case accentuates the broad measure of subtle characteristics, in a frankly artistic way.

An actual "Crystal Circle," of fine gold from California